The title of this post is inspired by an email conversation I’ve been having with a friend about writing, thoughts and life in general… The initial inspiration came from a comment on her blog: “Give up something. Reflect. See how it changes the way you communicate. More than anything else the state of the speaker affects what’s said. Words are empty till you put yourself in them.”

I had already realised that with the diagnosis of myeloma, I had been given an opportunity to change, to see things differently, to connect and communicate differently. Mostly it didn’t feel like a choice… I felt like it just happened to me. So when I read Natasha’s words above, I reflected on them and responded:

“I didn’t choose to give up something, but sometimes the universe makes these decisions for you.”

One of the ‘giving up’ things has been about control… If you read my post about Hair a few months ago, you’ll notice that I had it all planned out, I would be in control of the process of losing my hair. I would decide when and how and it would all be neat and tidy and as I wanted it. Well, you already know it’s going to end badly, when you look at it like that.

You may have read about my weekend of surprises at the beginning of July, when my hair began to fall out in clumps while I was away from home and partying with family. It was somewhat distressing and certainly didn’t fit with ‘my plan’.

I had worn my hair clipped up in a pony tail on the Sunday, which seemed to look ok. When I got back home that evening, it was time to release my hair from its clip. Normally, the hair would have simply fallen back onto my neck, slightly flattened from being in a clip, but back to normal after a shower the next day. 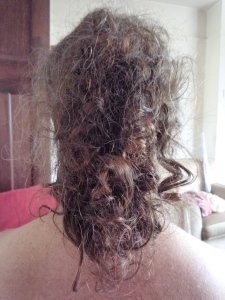 However, this was not ‘normal’ at all. My hair just stayed where it had been held by the clip. All the hairs that had been coming out during the day had not fallen out onto shoulders or chairs.

They had just stuck in the hair clip and become a dreaded clump during the day. And the gaps they left were suddenly very evident. It was a horrible tangled mess and something had to be done about it!

The following morning my friend and I spent some time watching videos on YouTube, where people had shaved their hair off… for all sorts of reasons. There are a lot of fund-raising shaves, often for cancer research/support charities. There was one very annoying woman who had lost a stupid bet about some sports team winning a game and cried desperately throughout her hair being shaved off, while her family watched on and commented, not terribly supportively. I wanted to slap her!

Finally, we found one where a woman with breast cancer, who had begun to lose her hair through chemotherapy, had her partner shaving her head. He was very sensitive and made doing it look quite ok. Very calming to watch and empowering for my friend who was a bit nervous about using hair clippers for the first time.

We then watched a few videos about different ways to use/tie scarves as headwear… just for those cooler days, or perhaps if it looked good, to dress up a bit, for fun. Here’s one that I liked from a young woman with lymphoma: How to tie a head scarf. I had the intention of just going bald. I had already decided not to wear a wig and I don’t want to wear a scarf as a means to cover up the baldness. It has to add something good, fun, sassy, warm. I’m not hiding anything!

Tentatively the process began… first with scissors, cutting off the offending dread and longer hair… then with clippers on the shortest possible setting, with no guard… There were some very comic moments and some tearful ones too.

I didn’t feel especially sad about the loss of hair – it was so thin and lifeless at this point anyway, but it was/is a very strong reminder of what else is happening for me, how my life has changed, my shortened life expectancy and the upcoming stem cell transplant. 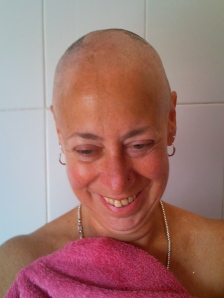 When the hair was clipped, it wasn’t completely gone – there was a tiny surface fuzz of hair that had not yet fallen out and the clippers had not touched. It showed up as small dark patches on my scalp, like a dalmation. It would definitely need to be shaved. But no time to deal with it just then, as I wanted to get off to my T’ai Chi class – no scarf, no hat, no proper shave – very brazen!

Remarkably, I had no comments or funny looks whatsoever. How very British! 😀

The following day we did the close shave with a simple Bic-type razor. Again, my friend was a little nervous, but lathered my head gently with soap and proceeded to do an excellent job, finished off with a kiss on top. A much smoother, shinier, sunnier, sexier finish!

I had no idea what I would look like bald. Had I known it would look this good, I might have shaved my hair off some time ago, when it was truly fashionable. I had no idea I had such a nice shaped head or how interesting it would be to see and feel my naked scalp. I do enjoy touching it. Surprisingly, only one person has asked to stroke it up till now.

Not completely surprisingly, I have found the loss of my hair liberating. For starters, I no longer feel the need to make a big show of effort when I get out of my car, using a disabled badge, despite feeling fitter and well-er than I have for months. My bald head just screams cancer to anyone watching. I know this is ridiculous, but nonetheless, it’s true.

I am free from using hair products and having to worry about how my hair looks. When I wake in the morning, nod off on the couch, scratch my head, nothing’s ruffled. And showers are so much quicker!

So much is hidden or revealed by hair, how we wear it says a lot about us. I dare say, how I wear my baldness says a lot about me too. The woman with leukaemia, who I visited in hospital while I was in for the stem cell transplant, said she hates her hair being bald and short. I thought she looked quite cute, but clearly it didn’t reveal the person she feels she is. She said she normally wears hers in a bob.

Another friend who had lymphoma chose to wear a wig. She’s quite pretty, so I think she would have looked great bald, but she confessed to not feeling confident enough to go out with a naked head. She did however have a very fun wig in bright disco pink, so I guess that also revealed some of her personality and was maybe some kind of liberation for her.

As another friend said, who has gone through chemotherapy for breast cancer and the accompanying hair loss, it is very intimate. I see myself fully when I look in the mirror. Initially it was quite startling and even now occasionally catches me unawares. Nowhere to hide. Emotions much more visible. It changes my relationship with myself and other people. Nothing is hidden, but maybe for some that’s a bit too much to see…?

Another surprise was awaiting me… loss of underarm and pubic hair – very strange for someone who doesn’t shave at all. They haven’t all gone, but enough have disappeared to feel denuded and look pubescent. Most disconcerting… especially at my age!

I suspect I also lost a few on my legs, so they look a bit like a bad cream removal job, when you accidentally miss a few. And most of my eyelashes and eyebrows!!!! I’ve still got the main thicker bits, but lost the ends!

I was so liberated on holiday that I managed to get a sunburnt head while driving around with the sun roof open, despite using sun cream. The peeling head look wasn’t ideal, but I learnt a quick lesson and did a full cover-up (scarf and hat!) when I took a boat ride in full sun. You really do not want to see those photos!

I have had so many compliments about the shape of my head and how good I look, which is lovely. Getting a tan on holiday probably helped too. As well as the gorgeous turquoise scarf I was given for my birthday.

I laugh… I forget and suddenly catch myself in a window or mirror. I go to scratch an itch and surprise myself that my hair’s not there. I no longer have to remove strands from my clothes.

One of the funniest things is watching little children openly stare at me. I usually stare right back, but with a great big smile on my face. Adults tend to be more reserved or well-behaved, or maybe they just wait till I’m not looking… well, they just miss getting my big smile! I like the honesty and genuine curiosity of the children. I heard one the other day saying “Mummy, look! That lady’s got no hair!!” Mummy promptly whisked her away and shushed her. It made me smile.

Walking through the fridge aisles in a supermarket is very COLD!!!! In fact I feel the cold a lot more generally, so while I loved it during the summer, and thought I wanted to keep it like this for a while, I suspect as we move into winter, I may just want hair back to feel warm again. Maybe I could just get some cute hats to see me through the winter…?

Being obviously bald does leave me open to sympathetic looks and comments. While on holiday, I had a brief chat with a woman in a cafe about dogs, then a few minutes later she leaned over and said, “we both feel for you, we’ve been through it too.” I had no idea what she was on about… I thought we were still talking dogs. We weren’t! We were talking cancer… Hurray!

(This was written in early August, but I didn’t get around to publishing it at the time.)

And now… well, I have been a bit depressed since the stem cell transplant. I look back at this and previous blog posts and wish I had that same energy, spirit, confidence and sense of humour.

Currently my lack of hair is just another thing I’m dealing with… I still quite like it visually, but I feel less confident socially than I was in the summer, so it just adds to that.

Also, as it gets colder, I have to manage my temperature more. I tried on a few hats in town yesterday and found adult hats too large for my head, so may have to go for children’s wear, which would have its benefits… no VAT, so cheaper!

Right now though, I’m feeling more loss than liberation… but I think that’s less about the hair and hopefully more just part of the recuperation process.

6 Responses to Loss and liberation