I’ve done it! I’ve survived the first year post-allogeneic (unrelated donor) stem cell transplant. That’s really quite something to celebrate, especially as I’ve not just survived, but I’m doing pretty well… you might even say thriving!

Thursday 16 May was the day to say:

Something special was required to celebrate… Number one on my List for Living and gratefully inspired by Helen Fawkes was to go to Paris for lunch. How decadent! How crazy! And as one friend said, “Oooooo! Posh!” What better way to celebrate a momentous event like the first birthday of my baby immune system?! So I could say instead:

I invited nine friends to join me. Some are fellow travellers on the myeloma/cancer journey, while others have accompanied me from the beginning with support and love along the way. So as well as a celebration, it was also an opportunity to acknowledge and thank good friends. Unfortunately, four of the nine couldn’t come for various reasons. I’m sorry you couldn’t be there, Debbie, Helen, Janette and Lynda.

A few weeks ago, I met my transplant twin, Julie, at clinic. I hadn’t seen her for a while as our appointments haven’t coincided and she had lost her phone, so we had temporarily lost touch. Of course I invited her too, as it would be her anniversary the same day. Sadly, although she was very enthusiastic about the idea, she wasn’t able to come either.

Two friends who could come wanted to go to Paris for a few days around that time anyway, so they booked their trips to coincide with my special day and would meet us on arrival at the Gare du Nord.

So the day arrived and saw just four of us travelling. The trip took on an even more decadent aspect as while Helen Fawkes lives in London, so Paris is only two and a half hours away, my little gang started the day in Nottingham so we had an additional two and a half hours each way. That meant a very early start… waking up at 5:00am! Fortunately the excitement of the day spurred me on to leap out of bed and be ready in good time, remembering tickets and passports, to head off for the station.

It was a 06:28 departure from Nottingham for Sam and Janet, with A and I joining six minutes later at Beeston. We’d booked first class tickets on the trains to and from London, so big comfy seats, lots of space and complimentary drinks and snacks helped to ease us awake.

During the morning, I received congratulatory text messages from everyone who’d been invited but wasn’t there, which made me feel like they were with us in spirit.

Going through Eurostar security at St Pancras, I chatted away merrily to a security guard, saying that we were going to Paris for the day. He reckoned we were leaving a bit late, taking a train at 09:17, to which I responded that we had started travelling at 6:30, which he acknowledged with a shrug and a smile and wished us a great day.

Both the London train and Eurostar journeys ran smoothly, bringing us to Paris for 12:47, where Rhiannon and Wendy were waiting together, welcoming us with big smiles and the obligatory continental bisous on both cheeks, as we came out of the terminus.

Despite an earlier agreement between three of our party, and despite Wendy advising me that only tourists wear them, I was alone in wearing a beret. But it came in handy during the day, as I was easily spotted when we became separated. 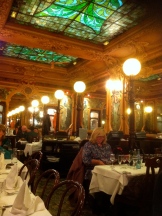 I’d booked a table at Brasserie Julien, dubbed “the most feminine of the Art Nouveau brasseries”, only a 15 minute walk away from the station. We were greeted warmly and received superb service, with plenty of joking, a mixture of Français and English being spoken by everyone. The best bit was when one of our party admitted to remembering just one French phrase from school… “Je voudrais un citron, s’il vous plaît” (I’d like a lemon please), which surprisingly but sadly was not needed all day. I’m sure we could have got her to use it if only we’d tried harder.

Our lunch began with champagne, with which we toasted not only Julie (in absentia) and me, but also Debbie, Helen, Janette and Lynda, as well as a friend in California whose birthday it was that day. We also raised a glass in memory of my friend, Abir, a Libyan woman Sam and I had both befriended at clinic, who sadly didn’t survive her stem cell transplant.

While the food was not the very best I’ve ever tasted, I enjoyed my escargots and foie de veau, followed by crêpes Suzettes. But mostly I enjoyed the great company. Not being rushed, we took time to chat, giggle, eat and drink (an excellent Sancerre!), in a very relaxed manner under a beautiful stained glass roof, surrounded by Mucha-esque paintings.

Lunch lasted longer than I’d anticipated, but we still had time to jump in the Metro and head towards Montmartre, where we took the funiculaire up to Sacré Coeur, managing to avoid an opportunistic pickpocket en route. We had a wander around the Place du Tertre and a few of us sent postcards, but hélas, le temps passe vite quand on s’amuse (alas, time flies when you’re having fun)!

There was no time for a drink at a terrace cafe. And somehow we didn’t get around to buying a beret for Sam or Rhiannon. We made our way back to the Gare du Nord à pied, all of us wishing the afternoon could have been a bit longer.

We hugged goodbye to the two remaining in Paris and made our way up to the Eurostar check-in. The rest of the evening/night was spent rolling rapidly through Northern France and Southern England with any one of us yawning or nodding off at various times and none of us talking very much, but all of us brimming with grins, memories and bonhomie.

Thank you to my lovely friends for joining me in this crazy idea and making it such a delightful day, more special for being so brief and so wanton. As Sam put it, “when else am I ever going to be invited to go to Paris just for the day?!” So eloquent, Sam! 😉