Just when you think it’s safe…

It’s over 7 months since the transplant and I’ve been very lucky… 100% chimerism, undetectable myeloma, very mild GvHD and no serious infections. Until now…

For the past three days I’ve had an increasingly painful sore throat, with a phlegmy cough. I’ve been staying indoors and even spent Saturday in bed in the hopes of shaking it. It’s only a few weeks since I got over a lingering but not particularly bothersome cold.

I’ve not been sleeping well for weeks, but on Saturday night I was awake several times and for quite some time. My throat was really sore and hurt even if I swallowed. I think I must have been sleeping with my mouth open, which made matters worse. As is common in the middle of the night, I felt dreadful and I got frightened…

The wife of a friend who’s been in chemo treatment for breast cancer was taken into hospital on 24 Dec as she was struggling to breathe. I still can’t fully believe it, but she died on Friday. They have two young boys and a grown-up daughter. The suddenness and arbitrariness is shocking.

I’ve been thinking about my friend a lot since he broke the news to me. I feel so sad for him and the boys in particular. I want to wave a magic wand and make it all better. But that night, although my thoughts were hugely influenced by this devastating news, they were more selfish…

Those scary middle-of-the-night thought monsters will pounce on anything to frighten me. Nothing quite like a fellow cancer patient dying to strike fear into my heart. It went like this… I’d have a temperature, need to be admitted to hospital, they wouldn’t be able to control the infection and I would die, without even having made a will or written down my burial plans. I’m still thinking of what music to have, for goodness sake. Never mind all the things I still want to do in life.

When I woke on Sunday morning, my throat was even worse, my head ached and I had that disorienting, out-of-focus feeling that usually indicates a high temperature. So I decided to take my temperature.

Oh dear! Despite taking Paracetamol throughout the previous day, it was up to 38.8˚. I took it a couple more times and while it wasn’t quite as high, it was still over 38˚. A temperature over 38˚ means I have to call the Haematology unit. Having made that call, I knew even before they called back, that I would need to be admitted. I was scared, my nightmarish thoughts still lingering in my mind despite the daylight.

So I packed a bag and, feeling scared, a bit woozy and more than a bit grumpy, went off to City Hospital. There were no beds available in either of the Haematology wards, so like last August, I’d been told to go to the Specialist Receiving Unit [SRU].

I have no idea what is so ‘special’ about this place, so I asked one of the doctors today and she explained that it’s the receiving [admissions] unit for patients who are being treated at City Hospital. It’s called Specialist because City Hospital is a specialist hospital – cancer, haematology, renal, rather than general medical. It certainly can’t be because of specialist nurses on this ward!

It seems that most patients, once admitted here, get transferred to a more appropriate ward, as happened to me last year – I was transferred to a Haematology ward. This time though both Haematology wards are full and it seems the next best thing, an oncology ward, is also full, so it looks like I’ll be staying right here, which is actually ok as long as I don’t have to stay too long. At the end of the day, hospital stays aren’t much fun and hospital food is the same in any ward – dreadful!

Even though they admit cancer patients with infections or reactions to chemo, the nurses here are not haematology or oncology nurses, so yet again I’m faced with a nurse struggling with my veins and making a meal of finding a good vein. 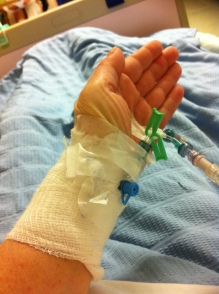 He only made one attempt and was successful first time, but he inserted the cannula on the INSIDE of my left wrist. It was painful being inserted and it’s uncomfortable and inconvenient. All the nurses who’ve seen it have commented on its odd position and that it’s somewhere they’d only attempt to cannulate when all others had failed. Because of its position, the tube easily kinks if I move, which stops the flow. When the flow stops, the pump makes an annoyingly repetitive “bing bing bong” sound and shows a message saying “occlusion below pump”. I then need to unkink the line and re-set the pump. Fortunately, I’m sufficiently experienced, if not qualified to do this without having to wait for a nurse.

The bandaging and mess of sticky tape you can see are the measures one nurse took to eliminate the kinking. I’m not sure the bandage was necessary, but it seemed to make her happy. The bit that was effective is the small piece of tape by my palm, keeping the tubes straight so effectively that I managed to sleep last night with a saline drip hooked up, without any kinks or bingy-bongy noises.

However, every time they give me antibiotics, it’s given by ‘push’, i.e. a syringe of liquid medication is pushed into the tube, preceded and followed by a saline wash, rather than a drip, which is slower and more gentle. Every time they do this, it really stings, I wince and the nurse gets very apologetic. So, eventually this afternoon, I’d had enough and asked for a new cannula to be inserted.

This one is higher up my arm, so it’s a lot more comfortable and doesn’t get in the way of typing either. The bruise at my elbow is from taking blood earlier and the gauze and tape plaster at my wrist is to cover the previous insertion point. Just call me a pin cushion!

When I arrived I was given IV antibiotics and I’ve had a few more now – I think it’s twice daily. I’ve also had IV Paracetamol, which has been effective in lowering my temperature, and two bags of fluids to ensure I stay hydrated. My friends are all saying “keep drinking”, but swallowing is painful, so I take wee sips of Ribena as often as I can manage. Here is visual proof if anyone doesn’t believe me.

They’ve taken blood tests and cultures – I don’t think there was anything too concerning, or they’ve not had the results yet. They did an ECG – clear, a blood sugar test – clear, a chest x-ray – clear, a urine test – clear and they’ve just done a throat swab, which was horrid – made me gag and cough. No results on that yet either. They’re fairly sure it’s mostly a virus, but there may be some bacterial infection too, so they’re giving me antibiotics just to be on the safe side. They can’t give me anything for the virus though, it will pass in due time, but a virus is less of a concern than a bacterial infection.

I was told to expect to see a Haematology registrar yesterday, but I guess they were too busy. Today though Dr Jenny Tam came to see me. She’s one of the Haematology registrars who was on the ward when I had my auto transplant last August. It’s amazing how comforting it is to see a familiar face. My first question was “Can I go home?” but she wants to keep an eye on me as it had been less than twelve hours since my temperature spiked, so she suggested that if all is well, I might be able to leave tomorrow.

To allay any fears, I want to be clear that for anyone with a normal immune system, this would just be a cough and sore throat virus and although it’d make you feel lousy and maybe have you in bed for a couple of days, it’s nothing to be hospitalised for. But this is how it is for people with a compromised immune system. Being admitted to hospital is just a precautionary measure, ensuring they get on top of any infection before it has a chance to cause real problems.

My own mortal fears from Saturday night have completely abated. In fact, they noticeably diminished once I was actually in hospital, quite strangely. I’ve only got a virus and I’m now ready to get out of here and start the new year, even if it means spending another day or so on the couch.

10 Responses to Just when you think it’s safe…