After a preliminary blood test on Friday 24 June, which showed that my white blood count was only 0.47, they asked me to come back into the hospital on Monday, by which time, the count needed to be over 1.

I didn’t worry about it too much over the weekend, but on Monday morning, off I trotted with some apprehension that maybe my white blood cells would not have increased sufficiently and I would be sent home in disgrace. That was not the case… my white cells were suitably numerous (3.9 to be exact) to allow the next step to take place, sending blood off to the lab to see if there were at least 10 stem cells per microlitre. Happily, they were well over (26.8), so I could proceed with the harvesting.

I had to wait an hour for the lab check but once we had the result, the nurse, Angie, could set the machine up. I was advised to go to the toilet, as I wouldn’t be able to be unhooked for the next three to four hours. It takes about 15 minutes for the nurse to fit all the tubes into the machine before hooking the patient up to it. 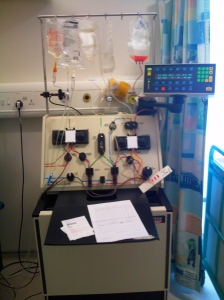 The first machine refused to play ball, so the nurse asked me to move over to a different chair and use another machine, which then took a further 15 minutes or so to be set up.

The connection was totally pain-free; simply a matter of undoing the covering caps on the lumens (the tubes at the end of my Hickman line), then attaching the tubes from the machine and switching it on, using the monitor/control unit (upper right in photo).

Once connected, I was able to use my laptop, eat, drink, chat, stand up, sleep, even move around, as long as I didn’t tangle or pull out the tubes.

The only thing I couldn’t do was walk away. If I had needed to use the toilet, they would have brought me a commode and closed the curtains. Fortunately, that wasn’t necessary and I managed the whole procedure with my dignity intact.

Despite the very hot sunny weather outside – one of the nicest days this year, I got quite shivery and sleepy at one point, so my friend lent me her sweatshirt and a nurse brought me a blanket and after we worked out how to recline the chair, I took a nap. Angie explained that the process does make patients quite tired; the blood is spun around, a bit like being in a tumble dryer or on a fun-fair ride before being put back, so it’s no wonder!

In the top photo, the bag with a small amount of reddish fluid (top right) contains my stem cells. It filled up to about halfway during the whole process.

Later on, Angie said I could look inside the machine if I wanted, so not wanting to miss a trick, I jumped up to see what was going on and took this photo. There is a flat black piece of metal below all the spools and tubing of the machine. This has a small window in it, through which you can see the inner workings.

The tubes you can see contain my blood in separated form. In the tube on the far right are my red blood cells, the next yellowish one is plasma and the pretty pink bubbles on the far left are my stem cells.

The nurse got a bit excited, as the machine had managed to find them very quickly, which is a good thing. I also got excited about seeing it all happening and being able to take a photo of it.

The collection process took about 3.5 hours, but then I had to have a blood transfusion because my red blood count was low (8.2). It was quite low anyway, but apparently the stem cell collection process lowers the count and if my blood count was too low, I would not be able to go on the machine again the following day. I found out that I have blood type O positive, if anyone’s interested.

I also found out that if patients who have had a bone marrow or stem cell transplant ever need to have a blood transfusion, e.g. if in an accident or having an operation where it may be required, we need to have blood that has been gamma irradiated. In my case, this is for the rest of my life. So that’s what I had, double-checked by two nurses before they hooked me up.

They also put a sticker on my patient record at the hospital to advise any medical staff who might need to know at any time in the future. And I get to carry around a card to inform that “I am at risk of transfusion-associated graft-versus-host disease” in case I am somewhere else in the UK or abroad when I might need a transfusion. If you’re interested to know more, check out the NHS Irradiated blood leaflet.

And because I asked, I learned that not only can I no longer give blood, but I can no longer donate any organs. I think I lost my organ donor card when my wallet was stolen a couple of years ago. I’ve not replaced it, but now I can’t. They told me I could donate my body to medical science, but the actuality of what happens if you do this is rarely anything as noble as being instrumental in a new cure for a rare disease, but more likely being cut up and inspected by medical students messing around with scalpels. I think I want to respect my body more than that, so won’t be taking that route.

The blood transfusion was as pain-free as the cell collection, but took time. I had been told it would take three hours, but when I grumbled, they checked with a doctor who agreed to giving it more quickly, so they managed to pump me up in only two hours. In the meantime, the harvested stem cells were sent off to the lab to check how many they’d managed to collect… 2.02 million!!!! Woo hoo!

They told me that 2 million is enough for the upcoming transplant, but to save enough for a possible future transplant, they wanted to ideally harvest 5 million, so I needed to come back the next day for a further 3+ hours on the machine.

I had arrived around 8:45 and didn’t leave that day till about 6:30… a very long day! I had been told it would take around 3-4 hours, but I didn’t go on the machine until around midday and what with the tests, setting up machines, chatting and waiting for results, plus the extra two hours of blood transfusion, it all adds up.

When I got home, I was quite tired, but felt ok and after another subcutaneous injection administered again by my now very adept friend, that evening I simply relaxed on the couch and watched TV before having an early night.

The following day my white blood cells were up to 15.6 and my red blood cells were also up to 9.6. All very healthy… partly due to the injections which encourage white blood cell growth and partly from the transfusion for the red blood count. They attached me around 9:00 and I was ready to leave around 1:00, not needing a further transfusion. Later, Angie called me to let me know they had collected a whopping 2.98 million cells so I wouldn’t need any more injections or collection sessions. Excellent news!

They now have enough cells to transplant back into me in August and to save in the freezer till some point in the future if/when I relapse and need a further transplant. With any luck the initial transplant may keep me going for 10+ years. Did I mention that my friend’s mother, who lives locally and is therefore seeing the same team of consultants, is very fit and well ten years on from her transplant? Clearly, this bodes very well for me, especially being 25 years younger, which I find uplifting and reassuring at times of doubt, fear and uncertainty about the future.

I got home feeling very sleepy, so had a nap on the couch. When I woke up, I had a Skype call with my mum and she noted that I was more lively than I’ve been for weeks. You can’t beat a good dose of transfused (gamma-irradiated) blood!