Firstly, let me apologise for so many exclamatory postings… but that’s how it is just now. At least it’s not boring (I hope).

I had an appointment with the consultant again on Monday… and received the results of my skeletal survey – a series of x-rays from top to toe, to see where the myeloma has caused bone deterioration, called myeloma bone disease.

Myeloma bone disease is due to the myeloma cells in the bone marrow affecting the surrounding bone, causing the bone to be broken down faster than it can be repaired. The extent of myeloma bone disease varies considerably from patient to patient. It most often occurs in the middle or lower back, the hips and the rib cage. The long bones of the upper arm and leg can also be involved.

Affected areas of bone often appear as ‘holes’ on an X-ray. These ‘holes’ are called lytic lesions. Lytic lesions can cause thinning and weakness in the bone causing it to break without undue force or injury – this is called a pathological fracture.

This is not a picture of my x-ray… it is just an example. The dark spots are the holes.

There seem to be so many aspects to this disease and it is so person-specific. Aside from the shock and just dealing with being disabled, in pain, fatigued, frightened, life-shortened, telling people who find it hard to hear, etc. it’s actually very interesting and I imagine it’s a great disease to specialise in for medics.

So, a couple of week ago, I was x-rayed… skull, all down my spine, both arms and legs. Fortunately the disease doesn’t seem to affect the small bones in hands and feet, which means you don’t lose those critical functions.

I found out that I have the following inventory of holes:

Left femur (long bone in upper leg)
Both left and right humerus (long bone in upper arm)
Only one thoracic vertebra in spine, T7 to be precise (might explain bra discomfort), which seems to me to be very good news, as the spine is prone to numerous other problems
Pelvis/hip bone
Four or five fractured ribs (definitely explains bra discomfort)
Holes in my skull, which sounds the most worrying, but the doctors didn’t seem especially bothered. You can use me as a colander once I’m gone! Get ready, you pasta lovers!
But no further risks of fracture at present. Phew! 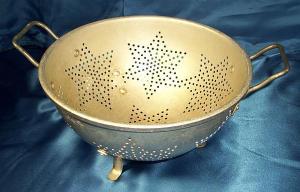 I just had to include this picture… my goodness, who’d a thought it… a Jewish-themed colander! I wonder if the holes in my skull make a pretty pattern?

I asked about bisphosphonates, molecules that bind to calcium and are taken up into the bone. They interrupt/prevent/decrease bone breakdown and lessen the need for painkillers and/or radiotherapy. Sounds like a good thing to me!

I can’t take any bisphosphonates yet due to my continuing kidney impairment, but as that improves, which it is doing, they will probably offer me Zometa, which I hope will help with the pain/discomfort. It’s administered by IV injection and takes about 15-30 minutes, but only once a month.